"If the land mechanism as a whole is good, then every part is good, whether we understand it or not. If the biota, in the course of aeons, has built something we like but do not understand, then who but a fool would discard seemingly useless parts? To keep every cog and wheel is the first precaution of intelligent tinkering."

Due to past mismanagement of the land that is now LLELA, many wildlife species which were once common here have been lost. As habitat quality improves and opportunities become available, our restoration team is working to reintroduce missing fauna. 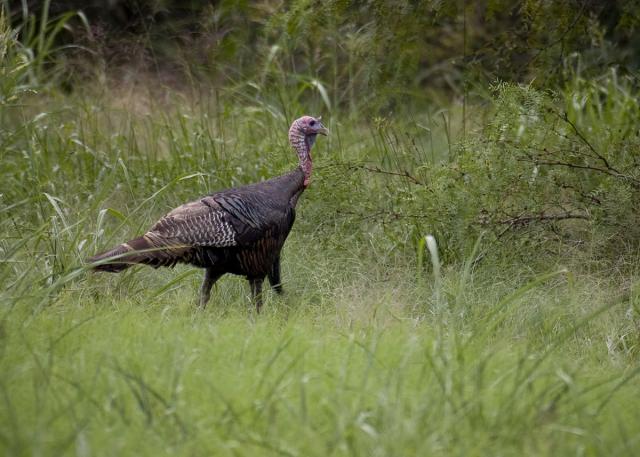 Rio Grande Wild Turkeys were once common in the Cross Timbers and Blackland Prairie edges. Until their reintroduction to LLELA in February 2005, there were few if any local breeding populations in southeastern Denton and surrounding counties. As part of an ecological restoration project, the U.S. Army Corps of Engineers, the University of North Texas, the Texas Parks and Wildlife Department and the National Wild Turkey Federation partnered to trap, band and release 49 Rio Grande Turkeys. The turkeys were trapped in Jack County from a population near Jacksboro on Dr. Ken Dickson’s ranch*. The birds were transported to LLELA, where they were banded and released. Twenty-five of these birds were also fitted with radio transmitters, enabling graduate students to track their locations. The transmitters provided data on the mortality of the flock through the first year at LLELA and provided information on the locations of good foraging habitat and roosting sites. Since 2005, the wild turkeys have reproduced each year and have remained a constant presence at LLELA.

LLELA staff have been experimenting with techniques for Northern Bobwhite Quail reintroductions since 2012. Results have been mixed, and the project is ongoing.

Additional wildlife species re-introductions are planned. Most of these require habitat improvements to be made in advance and those steps are currently being taken. A partial list of the species under consideration to be reintroduced includes, but is not limited to the following animals: black-tailed jackrabbit, plains pocket gopher, thirteen-lined ground squirrel, black-tailed prairie dog, collared lizard, and Texas horned lizard.

*In subsequent years, feral hogs decimated the habitat at the ranch in Jacksboro, and no turkeys have been seen there in recent years. The wild turkeys which were moved to LLELA from that ranch are now the only genetic representatives left from that population.