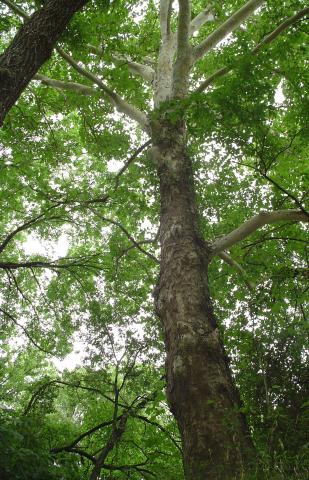 Historically the watershed surrounding the Elm Fork of the Trinity River at LLELA was fed by Stewart, Office and McWhorter Creeks. Typically the riparian zones along these waterways consisted of forest habitat. High soil moisture protected the woody vegetation from the wildfires that maintained grasslands in the upper reaches of the watershed. Through the late 1800s and early 1900s, human use of the land became more intense through farming, ranching, building of the railroad and eventually the construction of the Lewisville Lake Dam. The tributary creeks were cut off from their sources up stream and the natural hydrologic process was altered forever. Periods of drought and intense water usage lowered the water table and converted the tributary streams from perennial to ephemeral, only flowing above ground after heavy rainfall.

Most of the bottomland forests were destroyed long ago and except for a few locations where there are mature, diverse stands, little of the original habitat exists. Second-growth forests with low species diversity have regrown along these streams, dominated by cedar elm and other early successional species. LLELA staff and volunteers are working to increase the native diversity in these forests. Seed has been harvested from high quality remnant forests from the area, grown in the LLELA native plant nursery and transplanted into these riparian areas.  In addition to the reintroduction of many native plant species, control and elimination of exotic species such as Chinese privet and nandina is taking place.

In addition to the forests in the riparian areas of LLELA, there were some small areas along the streams that maintained herbaceous plant communities consisting largely of eastern gammagrass, switchgrass, prairie cordgrass and other moisture-loving plant species. Remnants of these communities can still be found at LLELA and restoration efforts have been made to manage them.