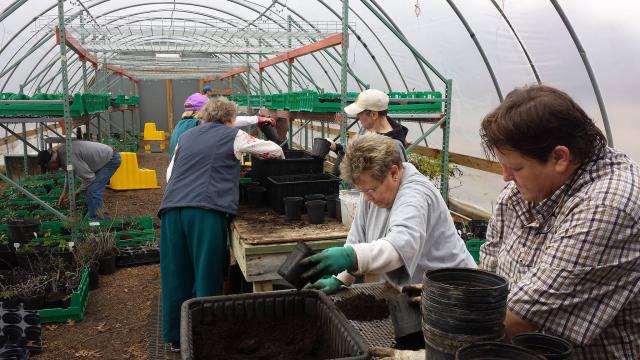 Winter seems like a time of relative quiet, when the natural world is slow and sleepy, awaiting spring. Therefore, it might surprise you to know that winter is one of the busiest times for LLELA restoration activities. Late autumn, when most plants have gone dormant, is the time remnant prairie salvage operations can begin without creating physiological stress on the very plants that we are attempting to save. During the cool winter months at the LLELA native plant nursery, harvested seed is being sown into pots and beds. Rootstock salvaged from area remnants is being separated and sprigged into pots for planting the next year. Plants that were potted last year now have developed root systems. If planted during the winter, they can thrive on early spring moisture and cool temperatures to establish strong root systems into the prairie soils.

This is also an important time of year to continue with the prescribed burning of prairie units. Prescribed burns are conducted throughout the year, when weather conditions allow, to provide a diversity of vegetative structure and a mosaic of good wildlife habitat. Many species of birds require high quality grassland habitat for their survival, which results from prescribed burning. 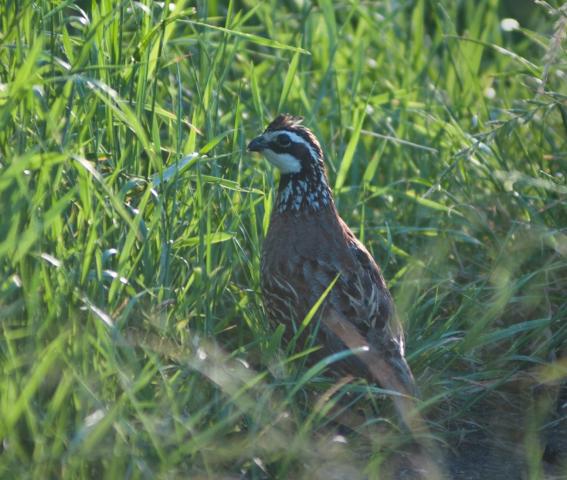 One of LLELA’s exciting projects is the reintroduction of northern bobwhite quail. To date, there is no scientific documentation of successful reintroductions of bobwhite quail, using pen-raised birds, anywhere in the country. So far scientists have not been able to show that pen-raised birds survive long enough after release to reproduce, and are killed by predators within days or weeks of release. Therefore, most experimental reintroductions of bobwhite quail have concentrated upon trapped and relocated wild birds, instead of pen-raised birds. For our reintroductions, wild bobwhite quail are not an option for several reasons. Most ranchers do not want their birds trapped and removed and where this has occurred, critical population numbers have dropped below a sustainable level, thus endangering a stable “donor” wild population. LLELA biologists are working on a method of reintroducing pen-raised quail that provides sufficient acclimation and resources necessary for them to survive long enough after release to produce offspring on site. Two groups of 30 birds each were released in July and August of 2015.The first group were banded with red color bands and the second group (in August) with blue color bands. Small numbers of quail were seen few times throughout the summer and reports of quail sightings came in sporadically and infrequently. However, in mid-January a small covey of quail were spotted, months after release. Some birds had red bands and others wore blue, indicating that birds from both releases have “coveyed up” together for the winter. We are optimistic about this positive sign.

Since mid-January, quail have been heard calling on several occasions in the same general area. It appears that these birds are healthy and may survive a few months to breeding season. We will continue to monitor these birds and will be releasing additional quail early this spring in hopes of successful nesting attempts throughout the spring and summer. 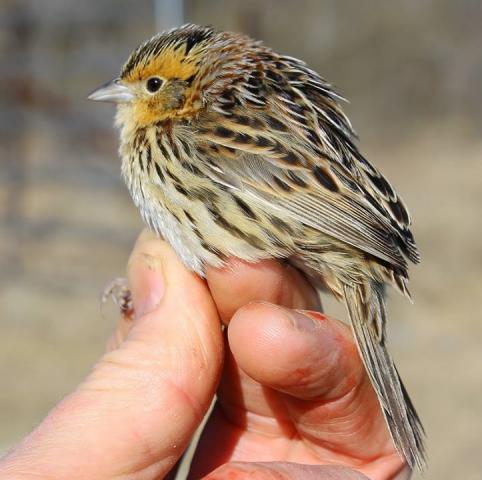 The LLELA Bird Banding team has been very active throughout the year with many more volunteers contributing to the effort. We are nearing the end of the third year of the grassland sparrow winter site fidelity study. The results of the study are intended to reveal the diversity, relative population numbers and degree of site fidelity of grassland species, many of which require good grassland habitat for wintering to maintain sustainable populations.

Since 2009 a dedicated flock of Master Naturalists has been essential in maintaining nest boxes, monitoring the nesting process, and banding songbird nestlings in nest boxes at LLELA. Approximately 90 nest boxes are scattered over 2,000 acres of land and water. Eastern bluebirds, Carolina wrens, eastern tufted titmice, Carolina chickadees, prothonotary warblers, eastern screech owls, wood ducks and hooded mergansers are among the bird species nesting in managed nest boxes. At the beginning of every year the group begins to check nest boxes for maintenance issues because by the month of February, bluebirds begin to search for nesting locations.

We are very appreciative of the support for all our avian conservation projects from both the Fort Worth Audubon Society and Prairie and Timbers Audubon Society. This work could not be done without their assistance.