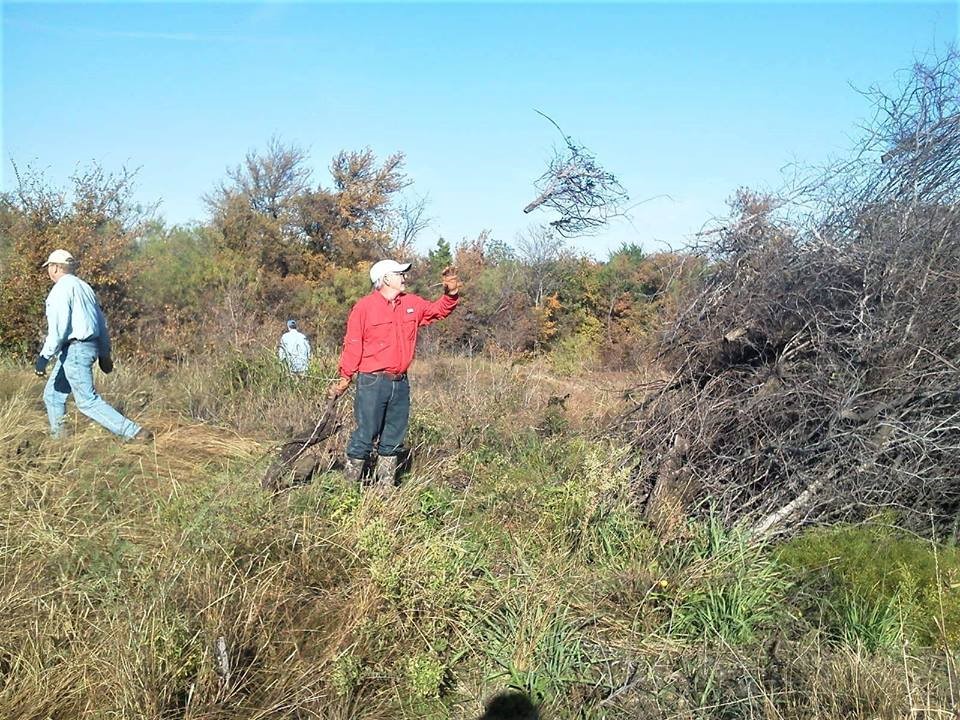 A typical Texas summer day.  I was sweating through every pore of my body pulling long mesquite branches into a pile. So was the rest of team: two chain-sawers, two herbicide stump “painters,” and four of us lugging and pitching invasive plants, trees and bushes into a growing pile. It would all burn later. The first hour, I dragged the branches and kept an eye out for an osprey I saw earlier. In the second hour, the mind becomes rather useless as the drone of the chainsaw becomes background noise and attention is focused on high stepping through the greenbriar.  At this point I just drag my body and focus on gripping a limb knowing the branch has to follow. The only other thought in my head – water.

Actually, another thought occurred when I paused to breathe deeply for just a little more oxygen. I looked at my leather gloves. They were dripping with sweat. The question had to be asked: “What in the hell am I doing out here?” 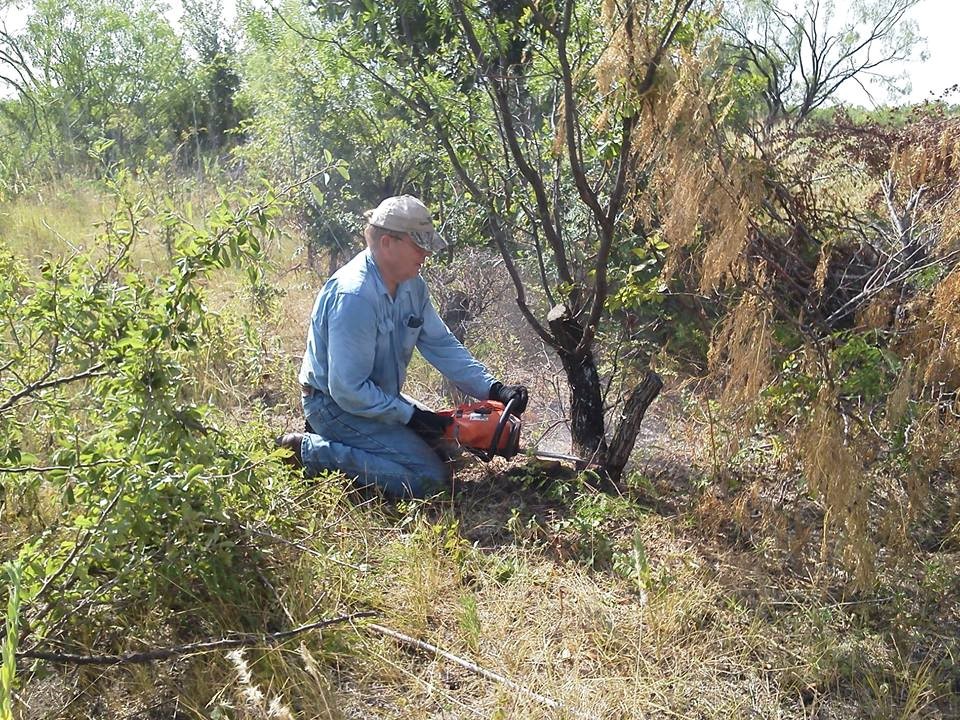 Volunteer comes from the Latin “voluntarius” – or willing. It is one thing to buckle down and do the daily work that must be done. Food must be cooked and kitchens need cleaning. But a “willingness” to form blisters in blistering heat?

For me it began, or slowly formed, as a fairly deep realization of privilege years before the word grew into a cultural tag. I have been experimenting with the idea of “gratitude” for a good part of my life. Eventually the idea became a conscious practice to offset the all-too-human habit of taking so many things in this life for granted – even taking life itself for granted. Five years ago, emergency surgery for a perforated colon brought the experiment to a conclusion. Life is privilege. Sometimes it takes a big hammer to nail down a good idea.

I retired two years later, many years earlier than planned and spent a year or so reveling in a life with no deadlines. What a joy it is to have a day with everything possible and nothing planned! But, of course, joy fades as it is wont to do, and boredom crept into my days. Anything will grow given the correct environment and nutrients. Boredom can grow into depression and mature into apathy. With no obligations and numerous electronic distractions, I found myself wanting. But what to do?

I want to give props to my niece. Kelly Farrell is a veteran nature guide and lead interpreter for Arkansas State Parks. The National Association of Interpreters (NAI) is devoted to this art, which has as its aim to help human beings connect with their long-lost family – which is all the life around them. In other words, a walk in the park with Kelly is much more than just learning the name of a tree or bird.  It’s personal. There is a feeling out there beyond the edge of the trail that escapes capture by mere technical acumen. You are outside, now look inside. Understand that the DNA sequence your body uses to oxidize sugars into energy is the same as that huge cottonwood tree. Not similar mind you, but exactly the same. This little fact provokes a big feeling for me. The majestic cottonwood is my cousin.

Kelly helped me join the NAI just in time to attend their regional conference in Grapevine in 2018. I met so many great students of nature during this four-day immersion in the world of naturalists who have made careers of bringing people into nature, and vice versa. Kelly introduced me to Lisa Cole, the Education Coordinator for Lewisville Lake Environmental Learning Area (LLELA). Lisa pointed me to Richard Freiheit, the Restoration Manager, and I showed up for my first day of work in the spring of 2018 with thin gloves, short sleeves, and tennis shoes. Lesson one: wear thick gloves, long sleeves and boots.

So on a hot morning in July, the chain-sawer crouches to cut a swath across the briar, privet, mesquite and countless others that steal the sun from the tall grasses. The painter is close behind, watching for the small stumps which must be anointed within a few minutes. It is amazing how plants seal up their wounds so quickly. Without this “last rites” procedure, that three-inch trunk of the mesquite tree will sprout a mesquite bush by next summer. Life wants to live. The draggers wade in at last, and try to solve the problem of extracting long thorny branches from the tangle.

A natural prairie isn’t pretty in a way that, say, a designer garden is pretty. It may seem lovely from a distance or even from the well-trod path, but when “in it,” up close and personal, it is chaotic and home to tribes of families that offer little affection for human company. There are animals big and small that bite, sting, and even burrow into skin. It is ironic, and not a little disappointing, that the big creatures we love to glimpse run and hide from us, while the irritating little ones engage us with passionate vigor. There are plants aplenty that seem to have evolved with the singular aim of repelling humans.

At some point in all this, a thought came to me: “I am not supposed to be here.” If I were alone and absent all technology including the clothes on my body, how long could I survive in this wide open space where hundreds of other living creatures thrive? Not long. There is respect for all these things and their adaptations earned by generational experiments that span ages, vastly greater than my species has been around on this earth. While dragging an unruly bunch of greenbriar, I step on a thorned mesquite twig laying just so on the ground as to pierce through my thick rubber mud-boots and into enough of my foot flesh to make me squeal. So who, really, is the invasive species here?

I wonder what it would look like if I could travel back to 1800. Before the first farmers set down the blade of the plow, the soil was a kind of rich that no amount of money can now purchase. The tall grasses dominated the view. Millennia of life and death, growth and decay, small adaptations, cleansing wildfires and vast herds of grazing bison teamed up to create this Blackland Prairie, named so after the charred, alkaline clay.  It is somewhat ironic that we had to create a huge dam on the Elm Fork of the Trinity River to end two centuries of farming and ranching of the 2,600 acres of land now reserved by the Corps of Engineers as a floodplain. The land we work upon has been idle since 1955. Safe from the plow and cattle, but ripe for Chinese privet and all the other opportunistic species that were unknown to the land just a second ago on the evolutionary clock. So we cut, and paint, and drag, and burn.

We also plant. How do you restore a prairie? Take out the stuff that shouldn’t be there and replace it with the stuff that should. Back at the greenhouse we plant seeds gathered by hand that have the ancient genes we favor, and propagate them throughout the year. A close eye on the weather helps to find the right time, because there is no potting soil at hand nor garden hose to water- in. Look for rain and roll the dice.

We haul heavy racks of gallon pots (wildflowers) or PVC tubes(grasses) containing Big and Little Bluestem, Indiangrass, Echinacea, Compass Plant, Penstemon, to name only a few. Gas-powered augers create the holes and speed the work, but there is no automation for the last step. It is an on-your-knees job. It is an active prayer, this careful art of giving a living thing a chance to grow. The soil is dark, sticky, and clumpy. The hole might be too deep, or shallow. Whatever the case, the plant must be left level with the ground and no big air pockets around or under it. Otherwise, when it rains air pockets erode causing bigger pockets and more root exposure. When I am done packing in the sides with the malleable clay, I stand and further pack it down with my foot and think, “We’ve done all that we can for you, my little friend. God speed, and good luck.” I stretch my back and look for the nearest new hole.

My back is sore the next day. But it rains and I am happy.

--by LLELA Volunteer Tim Trosper (thank you, Tim...for all that you do). 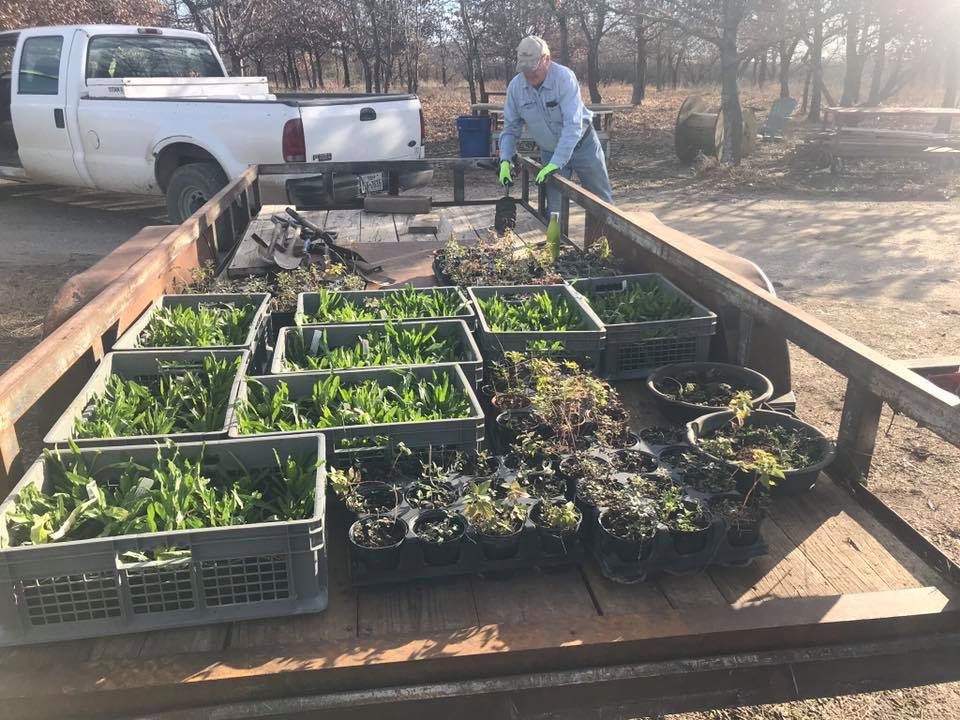 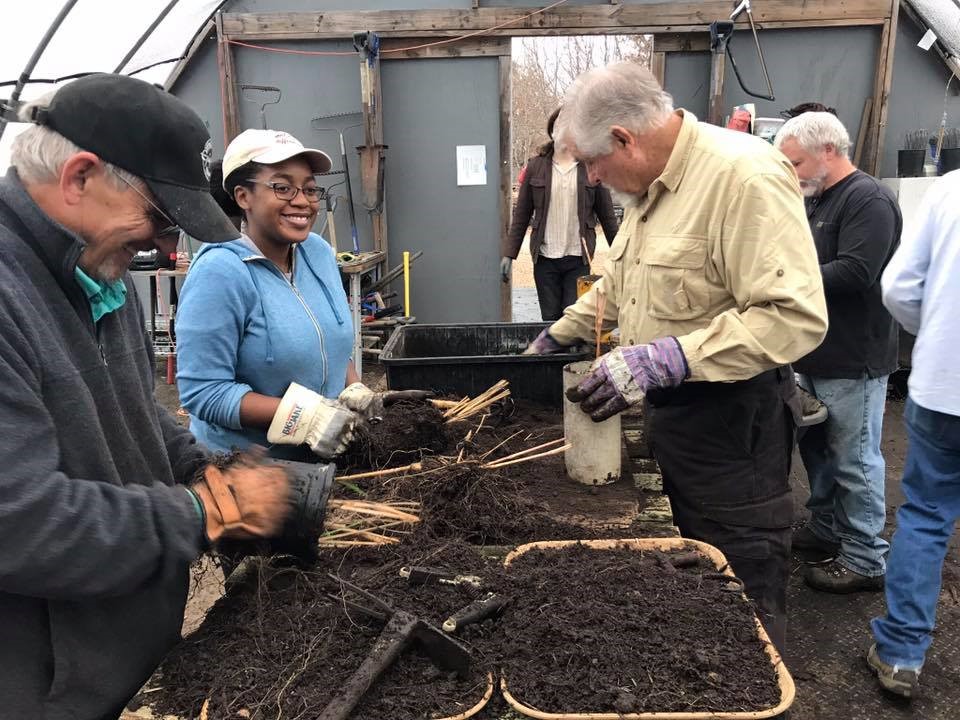 “The force that through the green fuse drives the flower”

If you want to experience something truly rare, go visit a prairie. You will be hard pressed to find a plot of ground that has not been plowed.