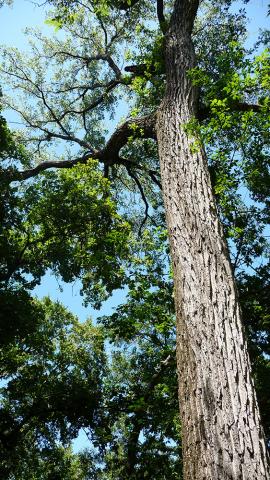 Positioned at the junction of two ecosystems, the Blackland Prairie to the east and the Cross Timbers to the west, LLELA is home to two distinctly different types of forest.

The Eastern Cross Timbers is represented at the very western end of the property, encompassing no more than 120 of LLELA’s 2,000 acres. Characterized by Post Oak and Blackjack Oak forest growing on somewhat sandy, acidic soils, the Eastern Cross Timbers stretched from the Red River to Hill County (Hillsboro) in a narrow band about 15 miles across at its widest point. According to author William Kennedy (1841) the band of the Eastern Cross Timbers was “so remarkably straight and regular that it appear[ed] to be a work of art. When viewed from the adjoining prairies on the east or west, it appear[ed] in the distance as an immense wall of woods stretching from south to north in a straight line, the ends of which [were] lost in the horizon.” In some areas, the Cross Timbers did indeed appear as an impenetrable wall (to the point that it has sometimes been referred to as the “Cast Iron Forest”), but in other areas it was broken with small prairie glades.

The rise of this “wall of woods” out of the prairie created an important landmark for Native Americans and other early travelers. The Eastern Cross Timbers appeared prominently on early maps. Its name probably came from the fact that it extends north and south across, rather than along, the major streams, which all flow eastward.

LLELA is working to preserve and restore our small piece of the Cross Timbers for wildlife and visitors to enjoy. 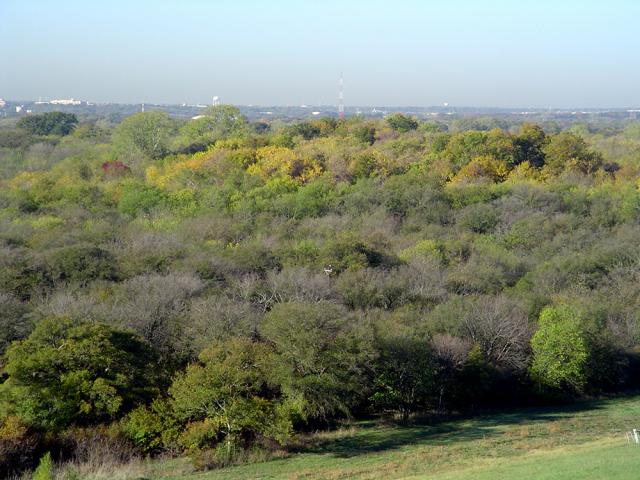 Bottomland Hardwood Forests can be found along the drainage of Stewart Creek, Office Creek, and the Elm Fork of the Trinity River. It is characterized by Bur Oak, American Elm, Cedar Elm, Pecan, and Sugar Hackberry, and is found on alkaline clay soils. High quality bottomland forest is not abundant at LLELA, but efforts are being made to restore appropriate areas. Wild turkeys, white-tailed deer, bobcats, Texas spiny lizards, Southern flying squirrels, and many other wildlife species benefit from our bottomland forests.

Learn more about our forest restoration.

Visit our Trails page to see which routes have the best forest views.