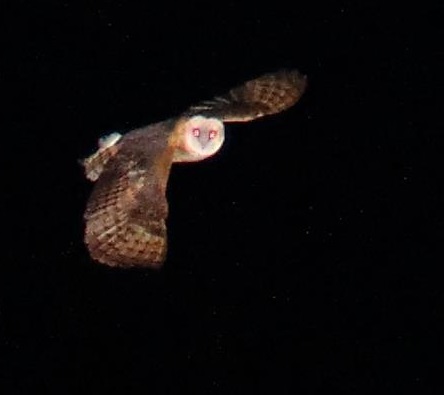 Several years ago LLELA’s Nest Box Team installed nearly a dozen barn owl nest boxes in hopes of attracting nesting pairs of barn owls. For the first couple of years after installation the only birds found in the boxes were a few screech owls. These birds were apparently using the boxes for roosts, but there was no evidence that they were nesting. No one had observed barn owls on the property for several years after they disappeared from “Barn Owl Ridge,” where they were commonly seen ten years ago.

While installing American kestrel nest boxes in the area in November 2016, a quick check of a nearby barn owl nest box revealed that it was occupied by a barn owl. We retreated from the area, but came back with a game camera to place nearby. We were successful in getting video documentation of nesting barn owls. You can see the video below.

We also installed a game camera on another of the barn owl boxes and found it to be occupied as well. Just shows, patience pays off. We are not sure how many young have been fledged this year, but they have probably done well because this seems to be a banner year for cotton rats and other rodents on the prairie because of good rains throughout the summer.

Barn owls are in a different family from all other species of owls. They are probably the most specialized of all owl species, being almost completely nocturnal in their hunting activities. To support their hunting tactics in total darkness, barn owls’ ears are located asymmetrically on their head to allow the triangulation of sound. This makes it possible for them to unerringly attack and strike a mouse in the dark. To avoid detection and give them a “stealth mode” while hunting, they also have, (as do other owls), “fluted feathers,” which amount to fringes on the leading edge of their flight feathers that make their flight completely noiseless.

Barn owls’ diets are composed almost exclusively of rodents. They nest in old abandoned sheds, barns, and grain silos or under bridges, and will adopt a man-made nest box (as at LLELA). They nest and hunt in close proximity to humans but due to their totally nocturnal behavior they are seldom seen.

Normally from four to seven eggs are laid in the nest, and incubation begins with the first egg so that the hatching is staggered. This assists the adults in being able to provide enough food for the nestlings while they are developing. The female incubates the eggs and is fed by the male, who also delivers food to his mate during the early brooding period. It has been documented that a barn owl will often eat half its own weight in rats and mice each night, and that the young in the nest require their own weight or more each day. This is why barn owls play such an important role in rodent control. Talk about “ecosystem services!”

As long as LLELA staff and volunteers continue habitat restoration and management efforts to protect the property we should all have the opportunity to observe these beautiful birds.